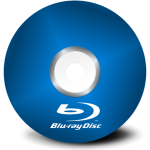 There’s no Blu-ray listed for that date yet, but we know from director Brad Bird that one is coming. We’re told by studio sources to look for the Blu-ray release to follow later in 2016, so it is definitely coming. You’ll just have to be patient a while longer.